Today marks 90 years since the Great Ukrainian Famine, also known as Holodomor. Holodomor was a premeditated act of genocide carried out by the Soviet government that killed at least 4 million Ukrainians. Between 1932 – 1934, 1 in 8 Ukrainians perished from starvation.
The crime that went unpunished 90 years ago, have returned: intentional destruction of critical infrastructure that leaves hundreds of thousands without heat and water, missile attacks causing a heavy toll of civilian casualties, limited access to food and drinking water in occupied and recently liberated cities and villages. In addition, Russia’s government is trying to blackmail the world with grain shipments hitting the most vulnerable countries that are dependent on the deliveries of Ukrainian grain. 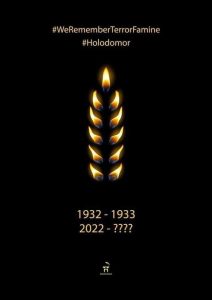