Through UHU’s Wounded Warrior Program, we can assist those who have been injured in battle. We are currently covering the non-medical expenses of three soldiers who are receiving complete prosthesis of their legs at the Medical Center Orthotics and Prosthetics in Silver Spring, MD.
UHU has welcomed Ruslan Tyshchenko, who served in the National Guard of Ukraine for 25 years as a combat engineer. Since the beginning of the full-scale war, Ruslan led a group of sappers, involved in the demining of the liberated Ukrainian territories.
On June 8, while performing a combat mission near the city of Balaklava in the Kharkiv region, Ruslan came under fire from an enemy tank, and a shrapnel hit a vital artery. His leg had to be amputated up to the groin.
The second soldier supported by UHU is 22-year-old Oleksandr Fedun, who will be receiving double prostheses. Oleksandr was an entrepreneur in the Zaporizhzhia region. Since the outbreak of the war, he has abandoned his business and family to defend Ukraine. On May 14, during a combat mission, Oleksandr’s car was ambushed by the enemy and he received serious injuries to both legs caused by a mine explosion. Oleksandr was able to save his own life by applying tourniquets to stop the bleeding, but unfortunately, when he was evacuated to the hospital, both legs had to be amputated.
Anatoliy Kirda, the third veteran in this group, will receive a prosthesis of his right leg. Anatoly was a sailor, working for a private company in Israel. With the beginning of the full-scale invasion of Ukraine, Anatoliy left his job and traveled to Kyiv to fight as a volunteer. After the liberation of Kyiv, Anatoliy’s unit joined the 95th Brigade in the Izum region. An enemy mine hit directly into Anatoly’s trench and he lost his leg.
We are proud to be helping the heroes of Ukraine, and we are able to do so with your generous support. Please consider making a donation today, so we can continue helping those fighting to protect the sovereignty and independence of Ukraine 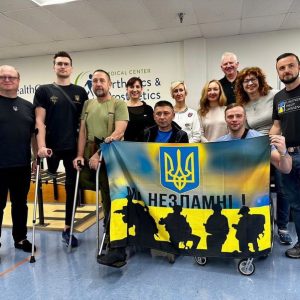 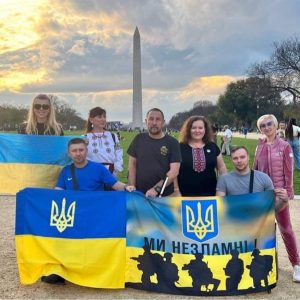 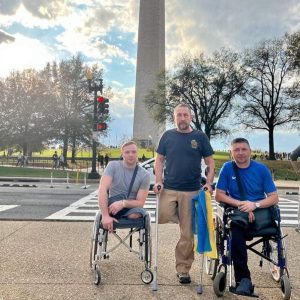