The war in Ukraine has resulted in an estimated 8 million internally displaced persons. Among those are little children, forced to leave everything they once knew behind to seek shelter and safety in other areas within Ukraine. War is their new reality, and they can no longer enjoy the peaceful childhood they once knew filled with laughter, friends, and activities such as playing sports with their peers. Many of these children used to spend their days playing soccer, but having fled their homes, they were not able to take even their soccer balls with them as they had to quickly flee and only gather what was of importance. 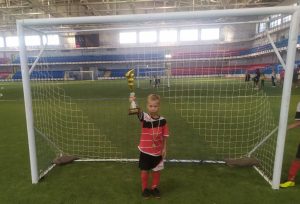 United Help Ukraine is raising money to help these young soccer players regain a sense of the world they once knew, providing soccer balls, t-shirts, soccer cleats, and other necessary equipment to allow these young children to once again enjoy the childhood that was taken from them by this war.
We are partnering with the Ukrainian charity organization, United Ukraine (https://www.unitedukraine.fund/) who was able to reach out to soccer coaches from Mariupol, Kherson, Donetsk, and Lugansk regions and gather a list of 600 children who had previously played soccer but were forced to flee to escape war zones. With your donations, United Help Ukraine will be able to provide these children with soccer equipment and ensure that they are still able to follow their passions through these difficult times.
The boy you see in the photo is one of these children. Kirill is 8 years old and he began playing soccer when he was 5, and grew to love the game, becoming one of the most talented players on his team. When Russian troops started bombing his small town of Novogrodovka, Donetsk region, he was forced to flee with his family. Luckily, they were able to settle down in Kyiv and start a new life, but Kiril desperately longed to play soccer once again. There was a football field near their new apartment, but he did not have any of the necessary equipment to play his favorite game. His mom reached out to our partner United Ukraine charity fund and they were able to send him soccer balls, t-shirts, and cleats, and now Kirill can once again play his favorite sport with children his age. He was invited to the local football academy, Liviy Bereh, which he will join once the war ends and training resumes.
This is just one story. We hope to help more children like Kirill. No child should have to see the gruesome scenes of war and have their childhood stripped away from them. Providing this equipment will not only give them a necessary distraction from the reality they face every day, but allow them to be children again and give a sense of hope that they can once again enjoy the game they grew up playing.
HOW TO DONATE: Facebook fundraiser: https://www.facebook.com/donate/766455897694869/5250463261687427/
Make checks payable to: United Help Ukraine PO Box 83426, Gaithersburg, MD 20883 Donate via PayPal: https://www.paypal.com/us/fundraiser/charity/1253086 Facebook takes care of the donation processing with no fees.