“Miracles happen. Because people create them.”
Because of the generous donations of our supporters, 1,000 new Hibuki dogs are now in production.
The first 100 have already reached the Ukrainian children with the help of 20 trained expert volunteers who are now working in 5 locations inside Ukraine.
Children from places like Mariupol, Bucha, Hostomel, Odessa. Children who are in refugee hubs, in hospitals or in temporary housing after being displaced. Children who have survived sexual violence, the destruction of their homes, deaths of family members and siblings.
Children who had stopped talking from the shock, but now smile again because they got their Hibuki. 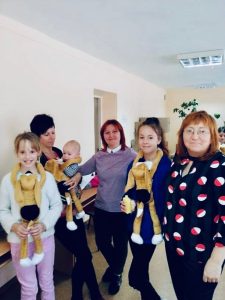 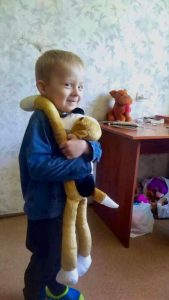 Children who refused to communicate with any unfamiliar adults, who are now open to receiving help from therapists. Children whose parents tell us “he doesn’t want to put it down, ever”.
This week we have seen a surge of messages of gratitude from the parents and therapists who are now able to offer the Ukrainian children the help they so desperately need. There are a lot of tears, but for a change, these are now tears of happiness and gratitude.
And it’s all thanks to you, who made this miracle happen!
Our partners in Israel who developed the Hibuki method and are training multiple volunteers in the field, have a current list of requests for 5,000 more Hibuki dogs, inside Ukraine and in refugee centers in Europe and Israel.
With a cost of $16 per Hibuki, we want to reach the goal of $100,000 as our next big milestone so we can produce and distribute 5,000+ more Hibuki dogs for kids and parents as soon as possible.
Please donate at:
Facebook: https://www.facebook.com/donate/298799802418101/5107284222671999/
PayPal: https://www.paypal.com/donate/?hosted_button_id=BLK952BQF2ZUS
#HibukiProject #HibukiStories #children #childrenphoto #StopWar #UkraineWar #Ukraine #refugees #StandWithUkraine #peace #therapy #charity