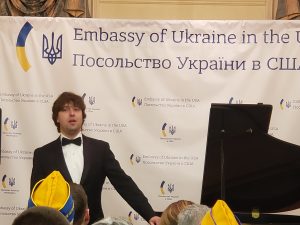 On Friday, March 1, members of the community and friends of Ukraine gathered in the Embassy of Ukraine in the USA / Посольство України в США to honor the memory of the Heavenly Hundred of Ukraine’s Revolution of Dignity of 2013-2014.
In his opening speech, Ambassador Valeriy Chaly, thanked the Ukrainian community and volunteer organizations in the United States for their continuous support of the Ukrainian soldiers who defend Ukraine against the Russian aggression.
Pianist Pavel Gintov performed music by Ukrainian composers. Pavel Gintov is not only a wonderful pianist whose poetic performances delight audiences around the world, he is also a superb narrator. His fascinating stories about the composers and pieces he performed captivated the audience and made the whole performance feel like an interesting journey into the Ukrainian musical history of the 20th century.
The Holy Fathers of the Ukrainian Orthodox Church in the USA and the Ukrainian Greek Catholic Church of the USA together with the audience sang “Eternal Memory” for the fallen Heroes.
The evening was organized by the Embassy of Ukraine in the USA and non-profit charitable organization United Help Ukraine. The funds raised at the event will be used to benefit wounded Ukrainian soldiers. Namely, UHU raised $4,700 that will be used toward paying for containers of medical equipment for two Ukrainian hospitals, the Irpin Military Hospital (Ірпінський військовий шпиталь) and Zhytomyr Regional Military Rehabilitation Center (Житомирський обласний центр реабілітації учасників АТО). This is a joint project with Support Hospitals in Ukraine.