Ukrainians and friends came together to the Lincoln Memorial in Washington, DC on Sunday afternoon to remember the Heavenly Hundred of the Ukrainian Revolution of Dignity. The event opened with “Plyne Kacha”, speakers remembered the days of Maidan, the unity and humanity of the people who came to the central square in Kyiv to oppose the oppressive regime. The sacrifice of the Heavenly Hundred who died on Maidan is not in vain. They died for Ukrainian Freedom and for the dignity of the people. The massive volunteer movement was inspired by these events on the Maidan Square and thousands of new heroes raised to protect their land from the aggressor when Russia attacked Ukraine. “Glory to Ukraine! Glory to Heroes!” sounded over and over during the event. 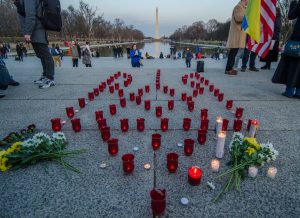 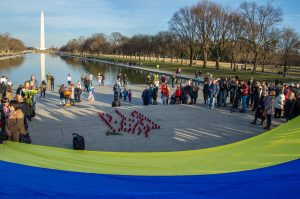