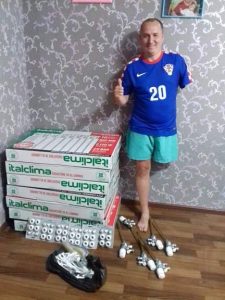 War hero Serhiy Khrapko lives in Kyiv with his wife and two young kids. Last year the government provided Serhiy with a new condo. However, it turned out that the heating system in the condo requires major improvement as the room temperature during last winter was only about +15C. Technicians volunteered to install the new system with no charge for their labor but the materials still had to be purchased. United Help Ukraine paid $920 to cover the cost of the materials, and now the new heating system has been delivered to Serhiy and is waiting to be installed. 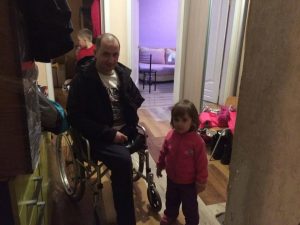 Serhiy was wounded on May 16, 2015 near Stanytsia Luhanska. He lost his left arm and left leg. After the heavy shelling Serhiy and a fellow soldier were assisting a wounded soldier.  They had just pulled him to the bushes, and Serhiy started providing first aid when shelling resumed and a mine landed close by. The wounded soldier was killed on the spot, and Serhiy was heavily wounded. The other soldier got a concussion but was able to pull Serhiy out to safety. Then he cut Serhiy’s body armor and provided first aid.  After that, Serhiy was evacuated to the hospital in Artemivsk.

Before the war, Serhiy worked in a private company that was making and selling school furniture. He was drafted on January 31, 2015. At the time, his daughter was only one year old and his son was 7.

Recently, Serhiy started training in the gym and has been making great progress.. A short video is here.