Last Saturday’s concert by three musicians was a storm, a tempest, and a lyrical reverie. Three friends Jingxuan Zhang​, Elias Dagher, and Sasha Beresovsky​ were expressive and captivatingly extreme at the piano and friendly and insightful in the off-the-stage chats. The Ukrainian community of the DC area enjoyed hosting this event and, at the same time, being guests at the energizing performance! This charitable event was organized by United Help Ukraine (UHU) to raise funds for wounded Ukrainian soldiers. In addition to the musical performance, we had a silent auction of paintings donated to UHU by students (ages 12-15) from the Lutsk Art School (Луцька художня школа​), Ukraine. 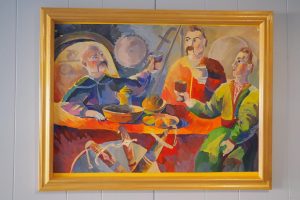 After accounting for expenses, the net sum raised with the event is $3,672. We will be posting full reports on the exact amounts spent after the help has been delivered to the soldiers. For now, here is an information about the planned distribution of the funds:
— $500 will be spent to purchase two accumulators for wheelchair for Mykhaylo (Angel) Lupeyko;
— $500 is reserved to buy medicine to treat Oleksandr Chekalov’s arthrosis;
— $800 goes to buy a pair of DonJoy Knee Braces for Oleksandr Chekalov;
— $1,275 from the silent auction will be used to purchase life-saving medical supplies, components of soldiers’ first-aid kits;
— the remaining $597 will be retained in the UHU Wounded Warrior Fund (WWF) for quick responses on ongoing emergency requests. 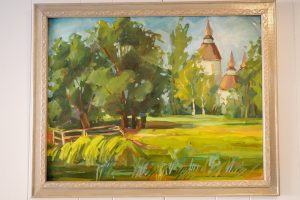 We are grateful to the generous sponsor of the event, Your Family Dentist (dr-ovcharenko.com). Thank you to our tireless volunteers for serving the food and drinks before, after the concert, and during the intermission, and for taking care of multitude of details that are impossible to list in the single FB post.

Thank you to all who attended the concert for your continuous support of UHU activities! 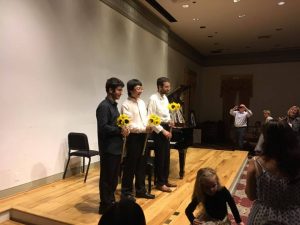 About the two soldiers who are the main beneficiaries from the event:

Mikhaylo (Angel) Lupeyko, 37, from Novhorod-Siversky. His comrades nicknamed him Angel because he was always close-by when they needed him the most. He had been fighting from the very beginning of the war, and had gone through the hottest points. Last August, near Debaltsevo, he lost both legs. But Angel is one of those people who never give up. “I will return to the front lines and will run so fast I will overtake the Russian tanks while they will be retreating from Ukraine,” says he jokingly.

Oleksandr Chekalov, from Lugansk. He was among the first volunteer soldiers of battalion “Aydar“, served as a scout and participated in many military operations that took place in the summer of 2014, starting from the first fighting in Starobilsk, then at Tryokhizbenka, Shchastya, Novoaydar. The man in his fifties, Oleksandr spent the most difficult year in the war. His health deteriorated from living in combat conditions. After the dusty toxic cloud from a mine explosion, that barely missed him and left him coughing for months, he felt it was time to retire from the service at the combat zone and fix his health problems. He has been experiencing digestive problems and, for the last several months, has been suffering from excruciating pain in his legs. Doctors diagnosed arthrosis: “He had injuries that led to serious diseases, problems with the joints, especially in his knees and hip.“ Oleksandr hopes to avoid the surgery with the proper combination of medications and exercise. He urgently requires expensive medical injections and knee braces to treat arthrosis and reduce the pain in his joints.