Members of United Help Ukraine joined with others in the Ukrainian-American and Russian-American communities and others in the Washington area on Sunday to commemorate the murder of Russian democratic activist and opposition politician Boris Nemtsov in Moscow two years ago. The event was held outside the Russian Embassy on Wisconsin Avenue. An outspoken critic of Putin regime, Nemtsov was a friend of Ukraine and supported the Euromaidan protests in Kyiv in the winter of 2013-14. A message of remembrance of Nemtsov and support for democracy in Russia was offered by UHU. 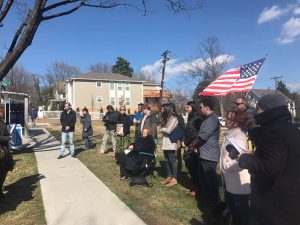