Many of you probably have heard about Roman Kubyshkin by now.
Roman was injured a year ago during a deadly fight in Peski on January 22, 2014. He was picked up from the battlefield with the fallen soldiers and taken to morgue. His injuries were incompatible with life but his pulse was checked one last time and he turned out to be alive! At first, doctors said he had no chance of survival, but the private neuroscience clinic Nodus started his treatment, and he can even talk a little now.
During the charity concert “Heavenly Hundred Commemoration Evening” at the Embassy of Ukraine, we started an urgent initiative for Roman, as he was in urgent need of surgery for a sculp implant. We had special auction items dedicated to help Roman and also many of the generous donors willing to help. Thank you everyone who came to the concert and supported this initiative and also more donors who sent additional funds later on. We raised the total of $1,800 which today covered a portion of Roman’s medical treatment at Nodus, the clinic that has done miracles for him. 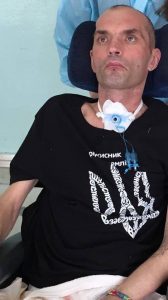