United Help Ukraine has been supporting the volunteer group “Children of Ukrainian Heroes” since September 2014. During this time we shipped a lot of boxes with clothes and diapers for the children of fallen, wounded, or active Ukrainian defenders.

However,  this shipment was much smaller than usual, only 6 boxes, but somewhat special. Three boxes out of six contained over 250 pairs of shoes in size 8, all donated by one person. The woman who donated these shoes, died a short time ago, and her wish was that her shoes to be donated to Ukrainian women and girls. All shoes were in a great condition, many of them were never worn. We decided that “Children of Ukrainian Heroes” would be the best volunteer organization to send this donation, since their main beneficiaries are families of fallen and wounded soldiers, and a lot of girls and women would benefit from this donation.

Volunteers took the shoes and let soldiers’ wives, daughters and mothers pick the shoes they liked. 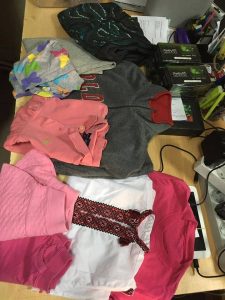