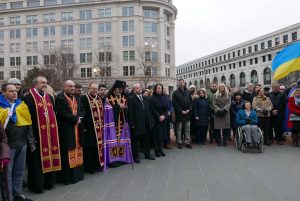 This Sunday afternoon, members of the Ukrainian community and friends of Ukraine gathered at the Holodomor Memorial in Washington, DC to honor the memory of the Heroes of the Heavenly Hundred who laid down their lives during the Ukrainian Revolution of Dignity.
The event opened with the song Plyne Kacha that was played on Maidan five years ago when Ukrainians were saying a final Goodbye to the fallen Heavenly Hundred heroes. Ambassador Valery Chaly addressed the community; other speakers included representatives of United Help Ukraine, US Ukrainian Activists, Ukrainian National Information Service (UNIS), and the International Committee for Crimea. They talked about the sacrifices of the Ukrainian people during the Revolution of Dignity and the ongoing war that the Russian Federation wages against Ukraine. They stressed the importance of unity and commitment in the continuous fight against the evils and for the future of Ukraine.
Archbishop of the Ukrainian Orthodox Church in the USA Bishop Daniel Zelinsky together with the Holy Fathers of the Ukrainian Greek Catholic and Ukrainian Orthodox churches performed a memorial service.
The ceremony ended with the performance of the hymns of Ukraine and the United States.
The event was organized by United Help Ukraine, US Ukrainian Activists, Embassy of Ukraine in the USA / Посольство України в США, the Ukrainian National Information Service (UNIS), the Ukrainian community with the participation of representatives of the International Committee for Crimea.