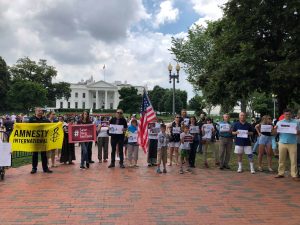 Today marks the 20th day since Oleg Sentsov is on a hunger strike. His only demand is the release of all Ukrainian political prisoners that are held in Russia.

People around the world come together in response to Oleg’s action, and his voice gets amplified. We hope that the reaction of the world will help to bring the release of Kremlin’s hostages and #SaveOlegSentsov.

We met near the White House, holding signs and Ukrainian flags. In their speeches, community activists stressed that every little act of support helps and that together we will change this situation. The names of all Ukrainian political prisoners that are held in Russia were listed on a poster, and each one of the names has been read aloud. Many of the prisoners are Crimean Tatars who suffer only because they support Ukraine in their home, in the occupied Crimea.

Thank you everyone who joined us today!.

DEMANDS OF THE WORLDWIDE CAMPAIGN

5. To the Ukrainian authorities: to create a position of special representative on the rights of Ukrainian political prisoners held in Russian and the occupied Crimea.