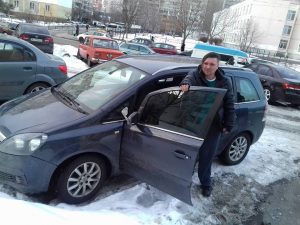 Thank you to everyone who contributed to the United Help Ukraine’s facebook fundraiser organized by Tanya Aldave​ to buy a car for the wounded Ukrainian hero!

Before the war, Mykhaylo (Angel) worked as a stage technician in his hometown of Novhorod-Siversky. When the war started, he volunteered to the army. Mykhaylo had been fighting from the very beginning of the war and had gone through the hottest points. He was nicknamed Angel because he was always close by when his comrades needed him the most. He was wounded in August, 2016, near the town of Debaltsevo. Mykhaylo lost both legs. But he is one of those people who never give up. “I will return to the front lines and will run so fast I will overtake the Russian tanks while they will be retreating from Ukraine,” says Angel jokingly.