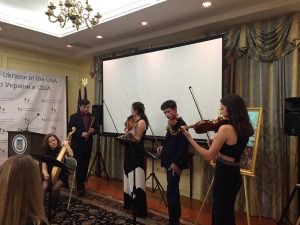 On Friday, February 23rd, members of the Ukrainian community and the American friends of Ukraine gathered at the Embassy of Ukraine in the USA / Посольство України в США for an event in commemoration of the Heavenly Hundred of the Revolution of Dignity. The Ambassador of Ukraine Валерій Чалий (Valeriy Chaly) spoke at the event and opened the evening with a moment of silence. The classical music concert was performed by wonderful musicians Solomia Gorokhivska and Andrei Pidkivka of the Gerdan music ensemble. This year, Solomia and Andrei shared the stage with two of their very talented students, and this connection with the young American musicians, who dedicated their recital to Ukraine’s Heavenly Hundred, made the performance especially touching. Bandurist Olha Sokalska played the traditional Ukrainian tunes, filling the Ukrainian embassy with the deep, clear and warm sound of her bandura. Olha lives in Kyiv, she was on the Maidan, and witnessed the events of that winter. We are grateful to Olha for sharing with us her very personal memories. Some people in the audience could not hold back tears while she spoke of the people on Maidan. Perhaps, unwittingly and very naturally, during both her talk and her singing and playing the bandura, Olha was able to convey the spirit of those days and made the audience to relive those moments with her.
As in the past three years, this year’s charitable event was organized by United Help Ukraine and the Embassy of Ukraine, with proceeds to benefit Ukrainian wounded soldiers. We were able to raise the total amount of $5,037. Proceeds from tickets sales and part of the items auctioned at the event will be used to buy rehabilitation equipment to assist Ukrainian wounded soldiers in the Irpin Military Hospital. In addition, this year we partnered with Ukrainian organization Не будь байдужим (Don’t be indifferent!). This organization raises funds for an important educational project of buying and distributing Ukrainian books and maps to schools in cities and villages in the eastern Ukraine. $475 of the auction proceeds raised from the sale of the three auction items donated for this cause (two paintings by Ukrainian artists and a handmade rushnyk) will be used to buy books for children in the “grey zone.”
Team UHU wants to thank the Embassy of Ukraine and Ambassador Valeriy Chaly for opening the doors of the Embassy and hosting this important community event for the fourth year now. We would also like to thank Solomia, Andrei, and Olha for their beautiful performance last night. In addition, thank you, everyone, who came to the evening and who took part in the auction! The funds raised last night will be used for important causes. This became possible because of your generosity!