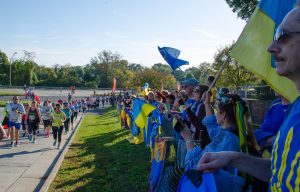 The team’s visit began at the Dulles airport, where they were greeted by the Ukrainian diaspora, volunteers from US Ukraine Activists and United Help Ukraine, representatives of Allied Forces Foundation and the Ukrainian Embassy including ambassador Vitaly Chaly.
On October 22nd, Ukrainian flags could be seen at both the START and FINISH lines of the 42nd MCM. Ukrainians from Washington, DC metro area, New York, New Jersey, and other states came to support Ukrainian wounded runners and our own UHU members, Ruslan Zamaray (42K) and Rodion Iwanczuk (10K). Dmytro Kotov, who came to the US for the rehabilitation, also joined the team for part of the 10K.
The Ukrainian team had a very busy schedule during the visit, but on October 25th, members of volunteer groups US Ukraine Activists and United Help Ukraine threw a party for the team and presented each member with gifts (mostly, for their children), total sum $2000, donated by supporters for this purpose. Big thank you from us and the team of Ukrainian warriors for your support and donations!