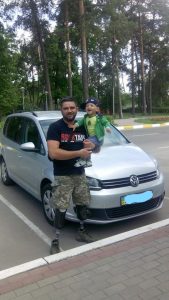 A few months ago United Help Ukraine organized a fundraiser (via Yuliya Murashko)​ with the aim of purchasing a car for wounded soldier Volodymyr Kovalsky. Thanks to many of you who contributed we were able to raise $5,220 (thus exceeding the goal of $5,000!). Today, we are happy to report that the car has been purchased! United Help Ukraine wired $5,000 toward purchasing the car. Due to the bank limitations we could only send $5,000 and not the entire sum. The remaining $220 was used in part to cover bank transfer fees, and the rest was added to UHU’s Wounded Warrior Projects to help another wounded.

Yuliya Severyn​, our tireless volunteer in Ukraine, writes a thank you note:

Dear friends! With your financial assistance we were able to purchase a car for a hero who lost limbs in this cursed Russian war.

Volodymyr was born in the town of Kakhovka, Kherson Region, in 1983. After graduating from a college he got accepted to the Department of Construction and Design in the Kyiv Politechnical Institute, from which he graduated with honors and also earning the military rank of lieutenant. Before joining the army in 2015, he worked in the construction company, then at a factory.

On January 27, 2015 Volodymyr volunteered to serve in the army. He joined the 14th Mechanical Brigade, and from May 2015 Volodymyr was assigned to the scouting unit.

On March 14, 2016, while on a mission, Volodymyr stepped on the landmine. He remembers that “there was an explosion that threw me off in the air, and my hat flew up on a tree. I felt pain in the left clavicle, I saw that I lost my left leg and that my right leg was barely connected to the body. It was just somewhat strangely hanging there… I did not lose consciousness and remember how my comrades carried me for some two kilometers by the shortest route. Then there was a hospital in Volnovakha, where they amputated my other leg…”