On March 19th United Help Ukraine hosted an evening of classical music “Pianists for Ukrainian Soldiers.” Five wonderful young artists John Urban, Andreas Ioannides, Mathilde Handelsman, Elias Dagher, and Sasha Beresovsky from Jacobs School of Music (Indiana University) and New England Conservatory travelled to the DC area all the way from Indiana and Massachusetts to perform for us a beautiful program of classical piano music. We were happy and honored that the Ukrainian soldiers, who currently undergo treatment at the Walter Reed National Millitary Medical Center were with us in the audience during that evening.

We would like to thank the pianists for their artful and inspiring performance. Their rendering of the classical music program was lively and energizing, tender and warm, and truly captivating. The program included piano duets by Schubert and solo pieces by Beethoven, Brahms, Chopin, Liszt, Debussy, and the Ukrainian composer Viktor Kosenko. The performance culminated in a beautiful song, Kosenko’s Lullaby, sung in Ukrainian by Joanna Jones. 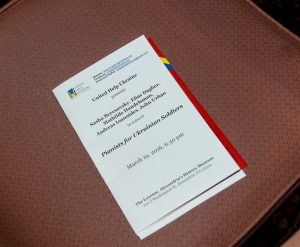 During the evening and through ticket sales, UHU was able to raise $3,973!

All proceeds will be split to help wounded Ukrainian soldiers Anatoliy Fateiev and Roman Kubyshkin. Anatoliy Fateiev – 53 yo., volunteer soldier, sapper. Anatoliy stepped on the “surprise” mine while clearing the road for Ukrainian army near Mariinka village in July 2015. He lost both legs. Anatoliy lives in small town Brovary, very close to Kyiv. $2,000 from the proceeds will go to buy a special motorroller to provide more comfortable life for Anatoliy. The remaining funds will be used to support rehabilitation for Roman Kubyshkin. Roman was injured more than a year ago during a deadly fight in Peski on January 22, 2015. He was picked up from the battlefield with the fallen soldiers and taken to morgue. His injuries appeared incompatible with life but his pulse was checked one last time and he turned out to be alive! At first, doctors said he had no chance of survival, but the private neurosciences clinic Nodus started his treatment, and he can even talk a little now.

Team UHU also wants to thank our sponsors, Buy Ukrainian and Ukraine Express, Alan I. Aldave, realtor with Platinum Realty and Champions Mortgage for continuous support with our activities!

Especial appreciation goes to all volunteers, whose hard work made this happen!